skip to main | skip to sidebar

Venice is a mildly panic-inducing place. It’s not too hard to get completely and totally lost in a matter of a few steps, and given that the city was put together without a plan and without accounting for carriages or cars (because why would you need those when you have a boat?) there are streets that are literally only wide enough for two people to pass next to each other in opposing directions. And those that only one person can fit through at any given time.

The whole city is paved in the usual Italian gray slate sidewalk that looks like tiles on a floor, the buildings are close together so you can’t see any towers or structures to help you know where you are, and the signs leading or from the main sights seem to be leading you ‘round and ‘round in circles. 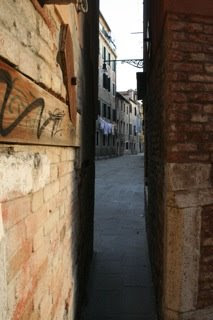 That’s how it feels to try to navigate Venice. We were only doing it with three people, and it was stressful. I can’t even imagine trying to do it with a big group or with a family. Be forewarned, therefore, don’t go to Venice unless you are prepared to get lost and end up in some pretty shady alleyways and/or have everyone gets really tired and frustrated on the way back to the station.

That said, the city is very beautiful. The buildings are striking and the Grand Canal in particular makes it feel very lovely and old. I could not stop thinking that A) I wanted a long flowing gown to swish around the city streets in and B) every depiction of the Black Death I had ever seen was probably drawn in Venezia. There is an air of absolute desertedness in most of the city, and that is surreal and creepy beyond belief, especially given that you seem to walk miles in twists and turns without seeing anyone.

Sometimes you’ll hear a song from the 1950s playing on an old radio from somewhere that you can’t see as you cross a deserted square with a Medieval well in the middle of it. Since everyone is lost, you’ll run into the same people (often at the same places) over and over, adding to the feeling of surreality. And then, after about an hour of walking and crossing canals and being confused…POOF there is Piazza San Marco and tons of people milling arou 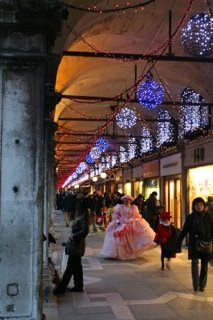 The piazza was decorated really prettily, with Christmas lights everywhere and a big stage in the very center in a fake kind of “Garden of the Senses” made especially for Carnevale. We had all bought masks to wear and the light glinted off of the glitter of every person’s mask making the whole crowd twinkle in the fading daylight.

So many languages were being spoken that it was impossible to predict where someone might be from until they began to speak. American English, British English, Japanese, Italian with various regional accents, German, French, Arabic, Russian, North African variants of French/local languages, Romanian…it was an experience to behold.

There was a troupe of actors putting on a very old style show in the area of the square closer to the water, with just a sheet over some twine for a backdrop and with masks for everyone. They seemed to be straight out of the Middle Ages, when groups of actors would travel around the countryside and entertain people. The show was a mixture of a bunch of different Shakespeare plays, all in Italian! The Tempest, The Merchant of Venice (of course), and of course lots of cross-dressing women and people falling in love. At the end, everyone died melodramatically, and then Shakespeare revealed himself and raised everyone from the dead with the magic of the written word. It was fun!

Many people with enough money to do it go ALL OUT for Carnevale in Venice. They dress in regal costumes from the Golden Age of the city, or from other great courts in Europe in the past (for instance I definitely saw a King Henry the VII). They are usually in couples, with masks and rich outfits, parading around the square and posing for pictures with tourists. They also all go out to dinner in the fancy restaurants around the edges of the square, which have huge plate glass windows, so everyone gathers around and takes their pictures while the dine.

The people who go all out are likely members of the modern aristocracy, so it is part fantasy and part reality that they put on looks that say, “Why yes, my darling peasant, you may take a photo of my resplendent outfit and escort” when people try to take pictures of them. I was slightly uncomfortable, since that is one of the only times that it is acceptable for the modern day nobility of the Rich to look down on those below them so obviously, even if it was supposed to be in good fun. 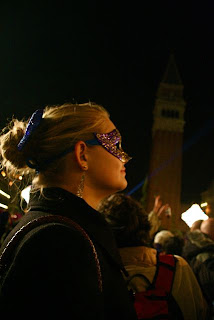 As for me, I wore a blue and glittery mask with a big glittery bow from the 99-cent store in my hair, and I sprayed golden glitter onto my head. Laura and Carol, the two girls I was with, both got masks that matched their outfits, and we all looked pretty fantastic if you ask me.

As the night drew on we were standing in the crowd, and I was looking around the square until I felt someone staring at me. It was two women who were trying to take a photo of my profile in my mask with the tower and the square behind me. I tried to duck and said, “Oh excuse me!” but they told me to keep looking up so they could take a picture. They took it and then just walked off, making me feel odd that someone in the world has a picture of me they took on purpose. I took one from the same angle so I could see what it looked like.

After the awkward picture moment, a grand beauty pagent began in the square! It was a beautiful show, with lovely ladies in fanciful outfits and beautiful dancing and singing routines. Everyone in the square was watching, and admiring the beautiful women. Except that they were all drag queens! They were exceptional! Every one had a different look, and they all did a beautiful walk on the catwalk in the spotlight. The hostess of the whole event was THE drag queen, Her Majesty Queen Elizabeth I of England! 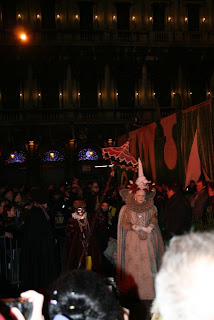 While we were standing and watching, a lovely lady dressed in a stunning Carnevale costume walked up next to me. She had a wig and a mask, but so did all of the other women in costume in the square. Everyone clamored to take her picture, and then she seemed to grow bored and walked away from the stage. Two minutes later, she was on the catwalk and strutting her stuff! I had no idea that Madame X was a drag queen, and I had been standing right next to her!

I’m not sure who won the pageant, but it was a thing to behold! The fact that this could go on in a country where it is still very difficult to be of a different sexual persuasion was wonderful. Everyone seemed to be having a good time, and no one made fun of the ladies onstage because they were striking and talented, and frankly put my everyday boring femininity to shame. 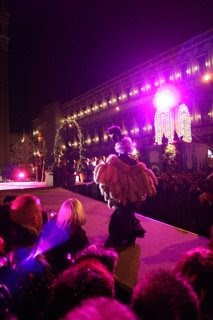 After that, we wandered back through the dark and deserted streets to the train station. We got onto the first train leaving to the next station on the tracks, where our train home was leaving from, with some German/Austrian guys standing in the same little compartment. They were funny, especially when the train made a random stop to wait for another one to pass and they stuck their heads out the door, saying in English, “Where are we…?”

Then we took the long and crowded train ride back to Ferrara, ending up at home at 2:00 AM on the dot. It was a wonderful adventure.
Posted by trovarmiinitalia at 6:37 AM

beautiful story, photos, and writing! I doubt the drag queens outshone your beauty, my scandinavian beauty! :-)

trovarmiinitalia
Boulder, CO, until January 13, 2009...then Ferrara, Italy
I made this blog so everyone back home can follow what's going on with me while I'm in Italy next Spring. It will probably become more and more in Italian as I get better at the language, but I want to make sure I don't forget stories to tel and things I did.